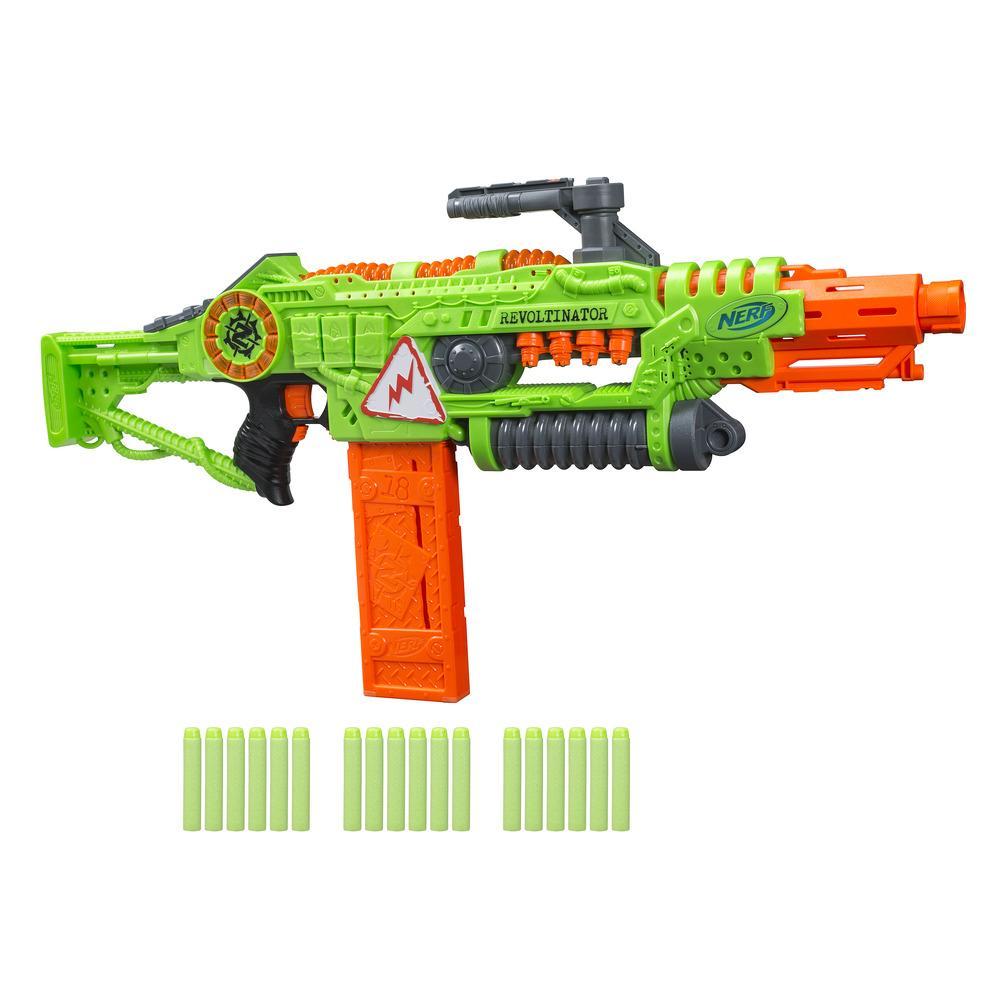 The zombie fighters created a way to generate power -- and they tricked the zombies into running it! Electrify the zombie-fighting fun with the Revoltinator blaster that has Power Shock electronic lights and sounds. When you power it up and fire, lights flash and glow in different places on the blaster, and it makes revving, blasting, and sparking sounds. This toy blaster comes with an 18-dart clip and 18 darts, giving you plenty of firepower to go up against the zombies. The blaster is motorized, so you can rev it up and shoot all 18 darts in a row with rapid-fire blasting. The 18 Official Nerf Zombie Strike Elite darts are designed for distance and constructed of durable foam with flexible, hollow tips. Two tactical rails let you customize the blaster with Zombie Strike accessories (each sold separately). Shock the zombies with the sights, sounds, and power of the Nerf Zombie Strike Revoltinator blaster!

• Includes: blaster, 18-dart clip, 18 darts, and instructions.
• POWER SHOCK LIGHTS AND SOUNDS: The Revoltinator blaster electrifies the zombie-fighting fun with Power Shock lights and sounds
• MOTORIZED BLASTING: Rev up the motor and pull the trigger to shoot 18 darts in a row with rapid-fire motorized blasting from this Nerf Zombie Strike blaster
• 18 NERF ZOMBIE STRIKE DARTS: Blaster includes an 18-dart clip and 18 Official Nerf Zombie Strike Elite darts that are designed for distance and constructed of durable foam with flexible, hollow tips
• TACTICAL RAILS: This toy zombie-battling blaster has 2 tactical rails so you can customize it with Nerf Zombie Strike accessories (each sold separately)
• SHOCK THE ZOMBIES: Gear up and get ready to shock the zombies with the electronic lights, sounds, and dart-firing power of the Nerf Zombie Strike Revoltinator blaster
• Ages 8 and up
• CAUTION: Do not aim at eyes or face. TO AVOID INJURY: Use only with official NERF darts. Other darts may not meet safety standards. Do not modify darts or dart blaster.
• WARNING: CHOKING HAZARD - Small parts may be generated. Not for children under 3 years.
• Demo batteries included. Requires 4 AA alkaline batteries (not included).