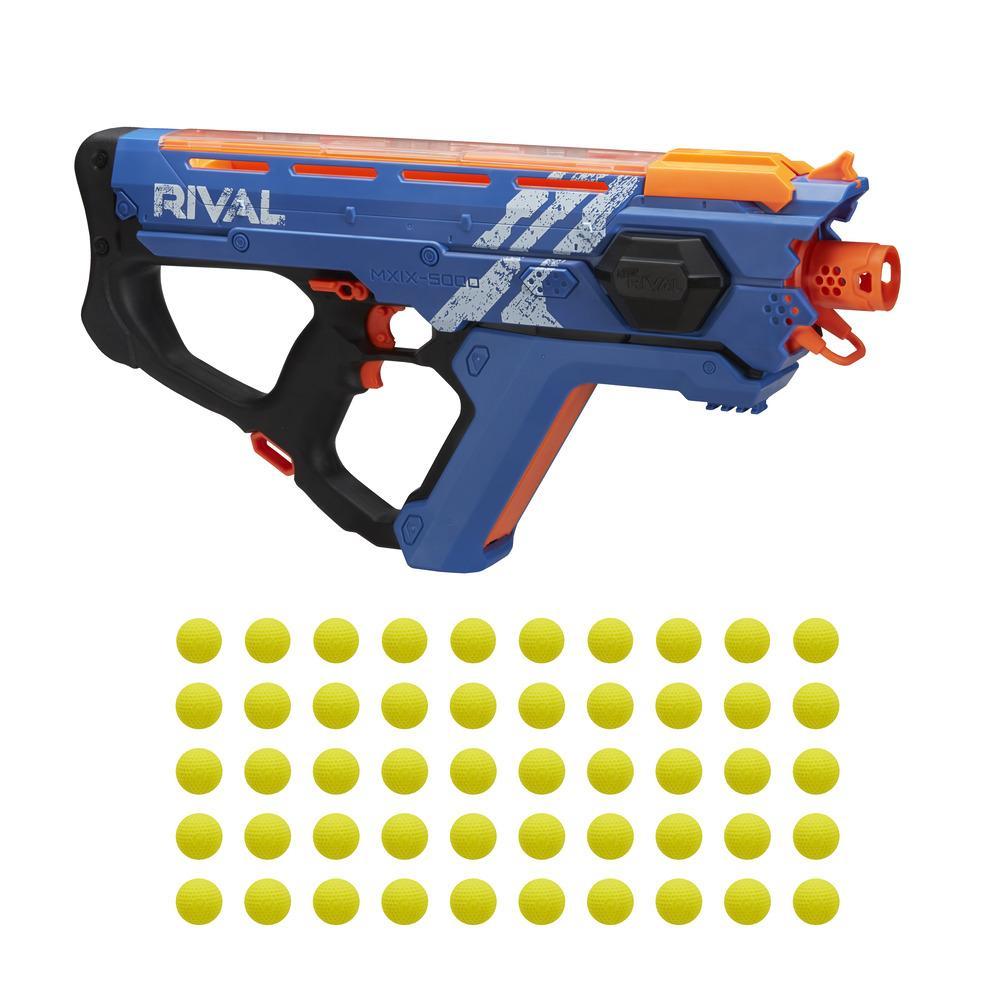 Experience the intensity of fully motorized, 50-round blasting with the Nerf Rival Perses MXIX-5000 blaster. This blaster features the fastest blasting Nerf Rival system, so rev up the motor and rapid-fire up to 8 rounds per second* to blanket the competition with a hailstorm of firepower! It includes a 9.6 volt 1200mAH rechargeable battery and wall charger, so there’s no need to stock up on batteries. The Perses MXIX-5000 toy blaster comes with 50 Official Nerf Rival high-impact rounds, enough to fully load the blaster’s high-capacity, easy-load hopper. Hold down the acceleration button to power up the motor then pull the trigger to fire. The trigger lock prevents accidental firing.
*Highest rate of fire is with a full hopper and fresh battery; rate of fire decreases as the hopper empties and the battery drains.
Nerf and all related properties are trademarks of Hasbro.

• Includes blaster, rechargeable battery, charger, 50 rounds, and instructions.
• FASTEST BLASTING NERF RIVAL SYSTEM: Blaster features the fastest blasting Nerf Rival system, firing up to 8 rounds per second* at a velocity of up 100 feet per second (30 meters per second)
• FULLY MOTORIZED BLASTER: Nerf Rival Perses MXIX-5000 blaster is fully motorized with a 50-round capacity and comes with 50 Official Nerf Rival rounds
• RECHARGEABLE BATTERY AND QUICK-LOAD HOPPER: Includes a rechargeable NiMH battery and a wall charger and has a quick-load hopper with 50-round capacity
• TRIGGER LOCK, ACCLERATION BUTTON, TRIGGER: Engage the trigger lock to prevent accidental firing; press the acceleration button to power up the motor and pull the trigger to fire
• Ages 14 and up
• For use with Nerf Rival products only.
• x1 9.6v 1200mAH rechargeable NiMH battery included.