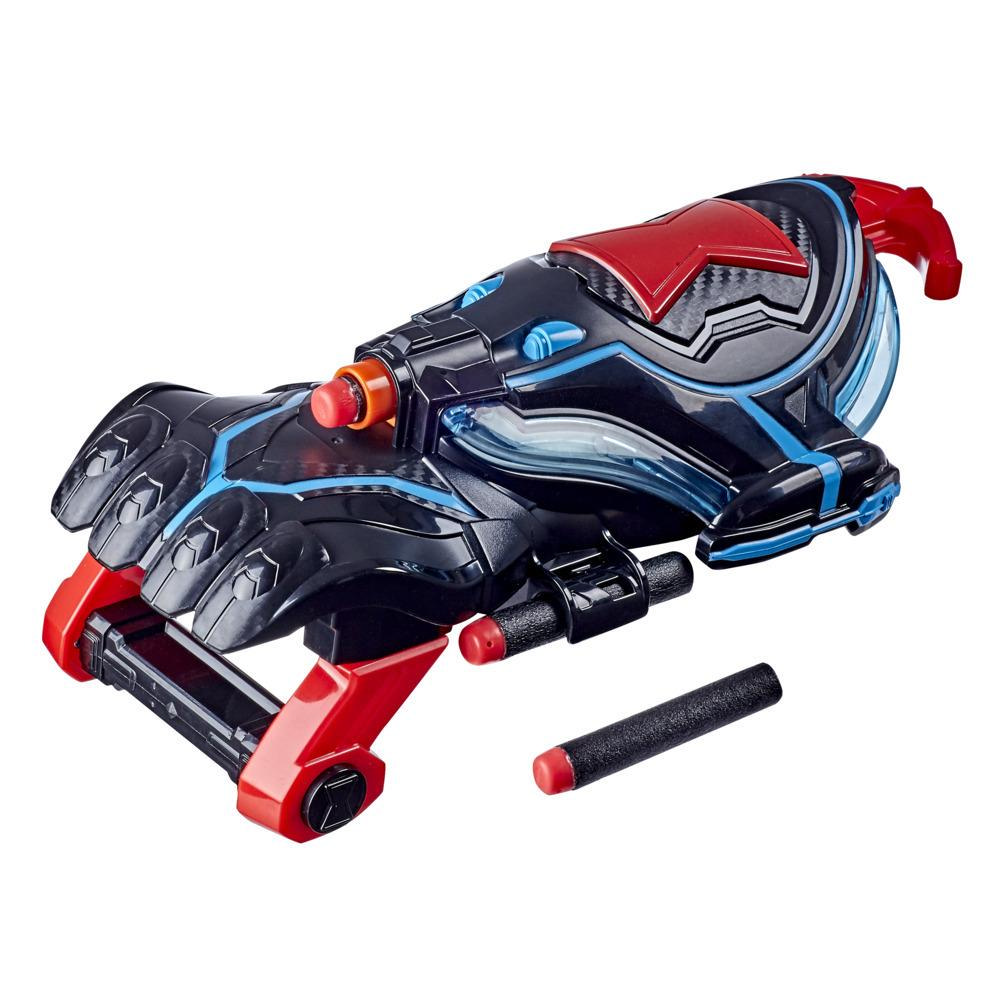 Warning:
WARNING: Do not aim at eyes or face. Use of eyewear recommended for players and people within range. Use only official NERF darts. Other darts may not meet safety standards. Do not modify darts or blaster.
WARNING: CHOKING HAZARD: Small parts may be generated. Not for children under 3 years.
Adult assembly required.

Natasha Romanoff reunites with a group of spies from her past to stop an evil force.
There’s more to being a Super Hero than capes and fancy suits. Being a Super Hero is about defending justice and knowing when it’s time to fight as a team! With Black Widow toys and accessories, kids can imagine powering up for action alongside their favorite superhero, Black Widow. And for even more action and adventure, check out Iron Man, Captain America, Spider-Man, Hulk, Thor, and more, with Avengers figures and roleplay!
With the NERF Power Moves Marvel Black Widow Stinger Strike roleplay toy, kids ages 5 and up can imagine taking a swipe at Taskmaster and other evildoers! Boys and girls will love pretending to be Black Widow, holding down the button on the Stinger Strike toy and performing the Stinger Strike move to launch a NERF dart!
Copyright 2019 Marvel.
Hasbro and all related terms are trademarks of Hasbro.

IMAGINE BLACK WIDOW IN ACTION: Imagine stopping an evil force as Black Widow with this Stinger Strike NERF dart launching roleplay toy!
ICONIC MARVEL MOVIE-INSPIRED DESIGN: Inspired by the Black Widow movie, this NERF Power Moves blaster for kids ages 5 and up offers exciting Marvel action and adventure.
STINGER STRIKE ATTACK: Boys and girls can imagine battling as the Black Widow! Pull back the lever and hold the button while punching to launch a Stinger Strike Nerf dart attack!
LOOK FOR OTHER BLACK WIDOW GEAR: Look for other Marvel Black Widow toys to start a collection, swap with friends, and give as gifts (Each sold separately. Subject to availability.)
FROM THE MARVEL CINEMATIC UNIVERSE: The astonishing Marvel Cinematic Universe is jam-packed with excitement, action and adventure, and colorful characters like Black Widow, Iron Man, Spider-Man, Captain America, Captain Marvel, Black Panther, and more.

• Includes: Blaster, 3 NERF darts, and instructions.
• Ages 5 and up
• WARNING: CHOKING HAZARD – Small parts may be generated. Not for children under 3 years.
• CAUTION: Do not aim at eyes or face. TO AVOID INJURY: Use only with official NERF darts. Other darts may not meet safety standards. Do not modify darts or dart blaster. Do not hit or swing at people or animals. Use away from breakable objects.
• Additional darts sold separately.
• Some assembly required.
• Eye wear not included.