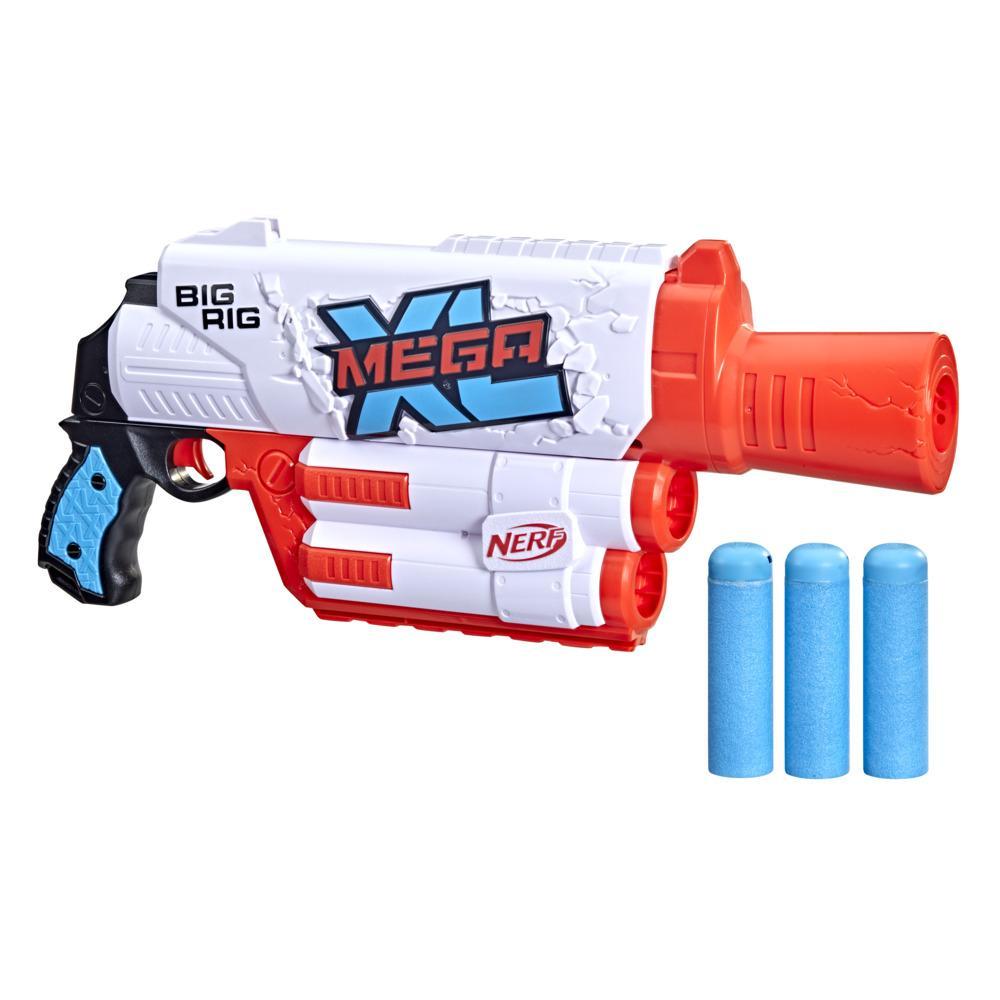 When you're ready to make your Nerf battles bigger than ever, gear up with Nerf Mega XL blasters, featuring the largest Nerf Mega darts ever! And when these monster-sized Nerf Mega XL darts fly through the air, they make a whistling sound. The competition will see and hear them coming -- and will know that you're in this battle to win big. The Nerf Mega XL Big Rig blaster features XL dart blasting for big battles! Load a dart into the front of the blaster, move the slide to prime, and pull the trigger to send the dart whistling through the air. The blaster has onboard dart storage to keep darts within reach to reload fast. The blaster is designed with smash-into-action details which let everyone that you’re changing the size of the battle! Includes 3 Official Nerf Mega XL whistler darts. Eyewear recommended (not included). Nerf and all related propertie sare trademarks of Hasbro.

•LARGEST NERF MEGA DARTS EVER: Make your Nerf battles bigger than ever with Nerf Mega XL blasters which feature the largest Nerf Mega darts ever!
•NERF MEGA XL BIG RIG BLASTER WITH XL DART BLASTING: Fire into Mega XL dart battles with the Big Rig blaster! Load 1 dart into the front of the blaster, move the primig slide, and pull the trigger to fire
•INCLUDES 3 NERF MEGA XL DARTS THAT WHISTLE AS THEY FLY: The Big Rig blaster comes with 3 Official Nerf Mega XL foam darts that make a whistling sound as they streak through the air
•ONBOARD DART STORAGE: The Big Rig blaster features built-in dart storage so you can keep darts nearby for fast reloading during your XL Nerf battles

•Ages 8 and up
•TO AVOID EYE INJURY: WARNING: Do not aim at eyes or face. Use of eyewear recommended for players and people within range. Use only official Nerf darts. Other darts may not meet safety standards. Do not modify darts or blaster.
•WARNING: CHOKING HAZARD – Small parts may be generated. Not for children under 3 years.
•Includes: blaster, 3 darts, and instructions.