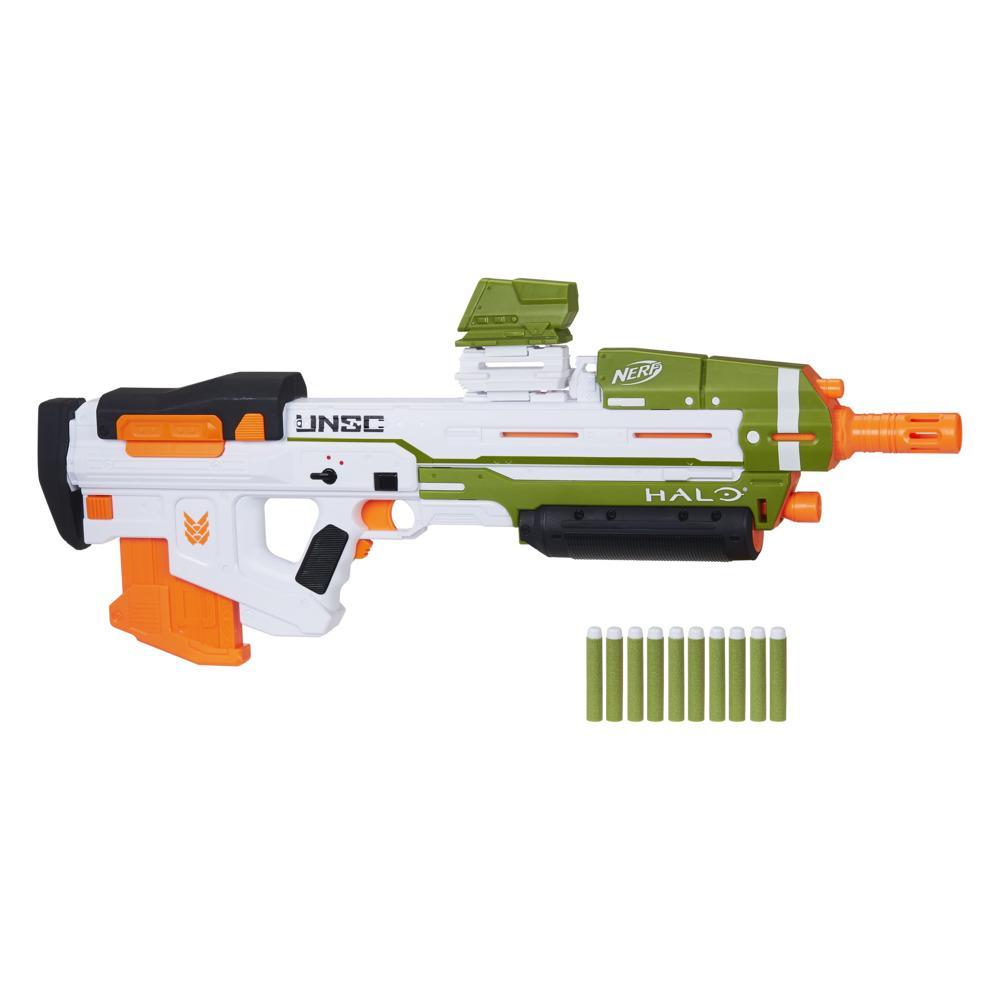 The Nerf Halo MA40 blaster is inspired by the one in Halo Infinite, capturing the look of the blaster from the next chapter in this legendary video game franchise! Imagine yourself as the Master Chief and go into battle against the alien alliance! Challenge opponents with this motorized, clip-fed blaster that unleashes 10 darts in a row. It comes with a removable, 10-dart clip and 10 Official Nerf darts, enough to fully load the clip. The Nerf Halo MA40 blaster includes a game card with a code to unlock this blaster's color scheme in the Halo game.* To start playing, hold down the acceleration button to power up the blaster's motor, then press the trigger to fire 1 dart. Press the trigger again to fire another dart. It comes with a rail riser that attaches to the blaster's tactical rail, so you can customize the blaster with Nerf accessories (not included). Eyewear recommended (not included).
Copyright Microsoft Corporation.
Hasbro and all related terms are trademarks of Hasbro.

DART-FIRING HALO BLASTER REPLICA: This MA40 blaster is inspired by the one in Halo Infinite, capturing the look of the blaster from the next chapter in this legendary video game franchise
MOTORIZED DART BLASTING: Scorch the battlefield with motorized dart blasting! Hold down the acceleration button to power up the motor, and press the trigger to fire
INCLUDES 10-DART CLIP AND 10 NERF DARTS: Includes a 10-dart clip and 10 Official Nerf Elite foam darts that are tested and approved for performance and quality
RAIL RISER FOR NERF GEAR AND ACCESSORIES: Attach the included rail riser to the blaster's tactical rail, to add customizing Nerf gear and accessories (not included)
GAME CARD WITH UNLOCK CODE: It includes a game card with a code to unlock this blaster's color scheme in the Halo game*

• Includes: blaster, bolt, rail riser, module attachment, clip, 10 darts, and instructions.
• Ages 8 and up
• TO AVOID EYE INJURY:
• WARNING: Do not aim at eyes or face. Use of eyewear recommended for players and people within range. Use only official Nerf darts. Other darts may not meet safety standards. Do not modify darts or blaster.
• WARNING: CHOKING HAZARD – Small parts. Not for children under 3 years.
• Assembly required.
• Requires 4x 1.5v C alkaline batteries (not included).