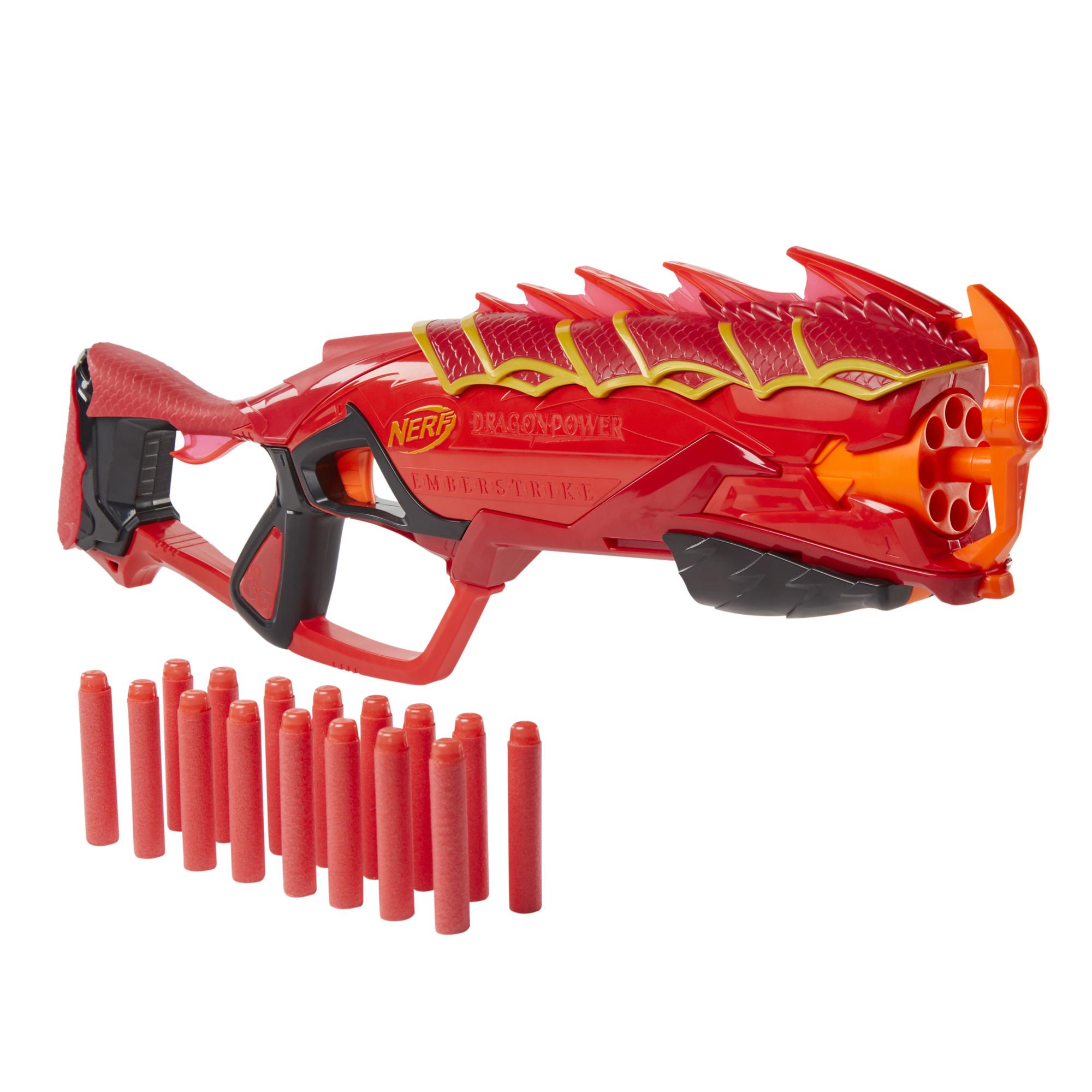 Blaze into amazing adventures with Nerf DragonPower blasters, and imagine yourself in a world where power is everything, and dragons are the most powerful beings of all! Nerf DragonPower blasters are inspired by the Dungeons and Dragons role-playing game and feature dramatic designs that capture the look of dragons. Scorch into action with this fiery-red blaster that is decorated with awesome spikes and dragon scale details. The Emberstrike blaster fires Nerf foam darts and has rotating 8-dart drum. Load 8 darts into the drum, pump the slide backward and forward to prime the blaster, and press the trigger to fire 1 dart. Prime again and press the trigger to blast another dart. It includes 16 Official Nerf Elite darts and has onboard 8-dart storage so you can reload as you play. Eyewear recommended (not included). No batteries required. Dungeons & Dragons and its logo are trademarks of Wizards of the Coast LLC. Hasbro and all related terms are trademarks of Hasbro.

•NERF DRAGONPOWER EMBERSTRIKE BLASTER: This dart blaster is inspired by Dungeons and Dragons and features a dramatic design that captures the look of a dragon for exciting dart-blasting adventures
•8-DART ROTATING DRUM WITH PUMP ACTION PRIMING: Fire 8 darts in a row from this blaster that has a rotating 8-dart drum and has a slide that you pump backward and forward to prime the blaster
•16 NERF DARTS AND 8-DART STORAGE: The blaster includes 16 Official Nerf Elite foam darts and has onboard storage for 8 darts, so you can quickly reload as you battle

•Ages 8 and up
•TO AVOID EYE INJURY: WARNING: Do not aim at eyes or face. Use of eyewear recommended for players and people within range. Use only official Nerf darts. Other darts may not meet safety standards. Do not modify darts or blaster.
•WARNING: CHOKING HAZARD - Small parts may be generated. Not for children under 3 years.
•Includes: blaster and 16 darts.