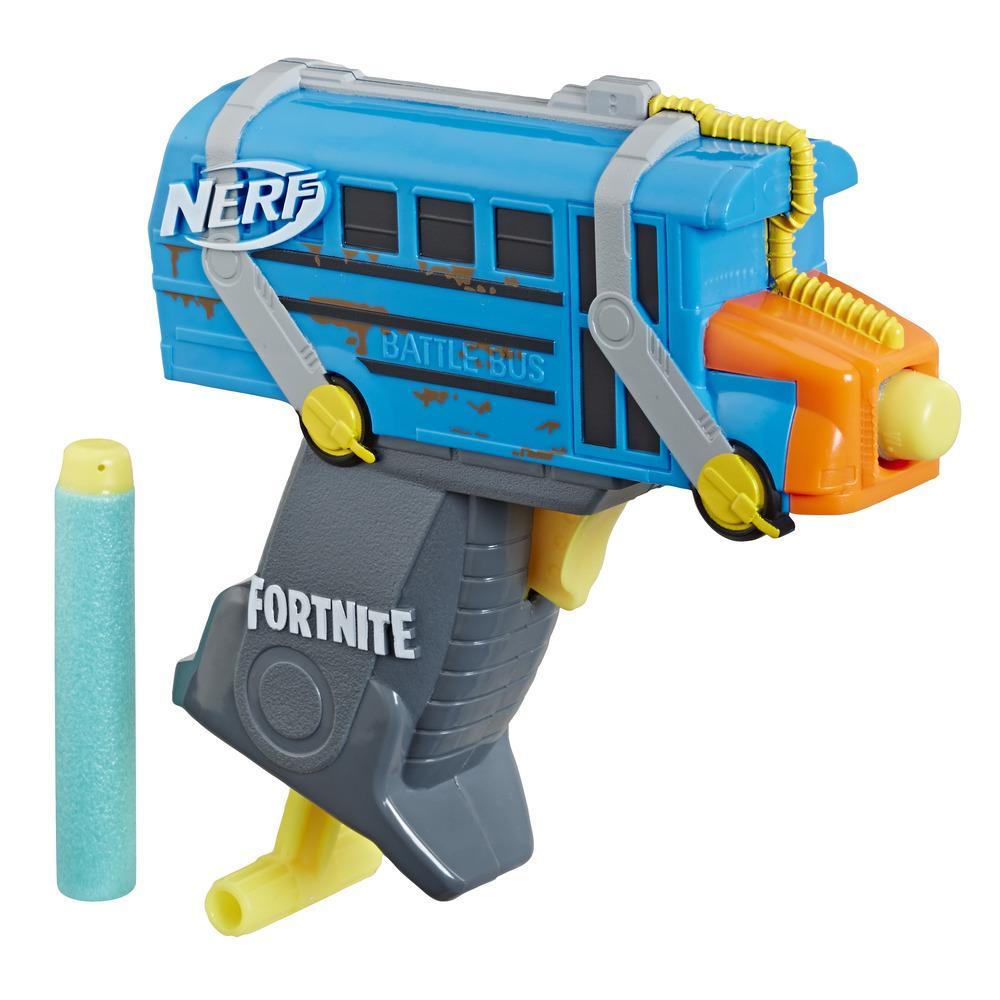 Blast into big fun with the Nerf MicroShots series of collectible, mini-sized Nerf toy blasters! Nerf MicroShots series blasters capture the iconic look of the original blasters -- and for this one, the flying battle bus you drop from to enter the Fortnite Battle Royale game -- but in a scrunched-down style all their own. Their look and size makes them collectible additions to any Nerf collection. This Nerf MicroShots Fortnite Micro Battle Bus blaster is inspired by the iconic battle bus used in the popular Fortnite Battle Royale video game. It includes 2 Official Nerf Elite darts and fires 1 dart at a time with hand-powered action (no batteries required). Load 1 dart into the front of the blaster, pull down the handle to prime, and pull the trigger to fire. Look for all the MicroShots series of micro-sized blasters for collecting and playing (each sold separately).

• Includes blaster and 2 darts.
• FORTNITE MICRO BATTLE BUS DART-FIRING BLASTER: Nerf MicroShots mini-sized blaster toy is inspired by the iconic battle bus in the popular Fortnite Battle Royale video game
• SCRUNCHED-DOWN STYLE: Nerf MicroShots collectible, dart-firing blasters capture the look of the original blasters -- and in this case, battle bus! -- but in a scrunched-down style all their own
• INCLUDES 2 DARTS AND FIRES 1 DART AT A TIME: This single-shot blaster comes with 2 Official Nerf Elite darts, fires 1 dart at a time, and is hand-powered (no batteries required)
• PART OF THE COLLECTIBLE MICROSHOTS SERIES: The blaster is part of the MicroShot series of collectible, micro-sized dart-firing blasters
• Ages 8 and up
• CAUTION: Do not aim at eyes or face. TO AVOID INJURY: Use only with official NERF darts. Other darts may not meet safety standards. Do not modify darts or dart blaster.