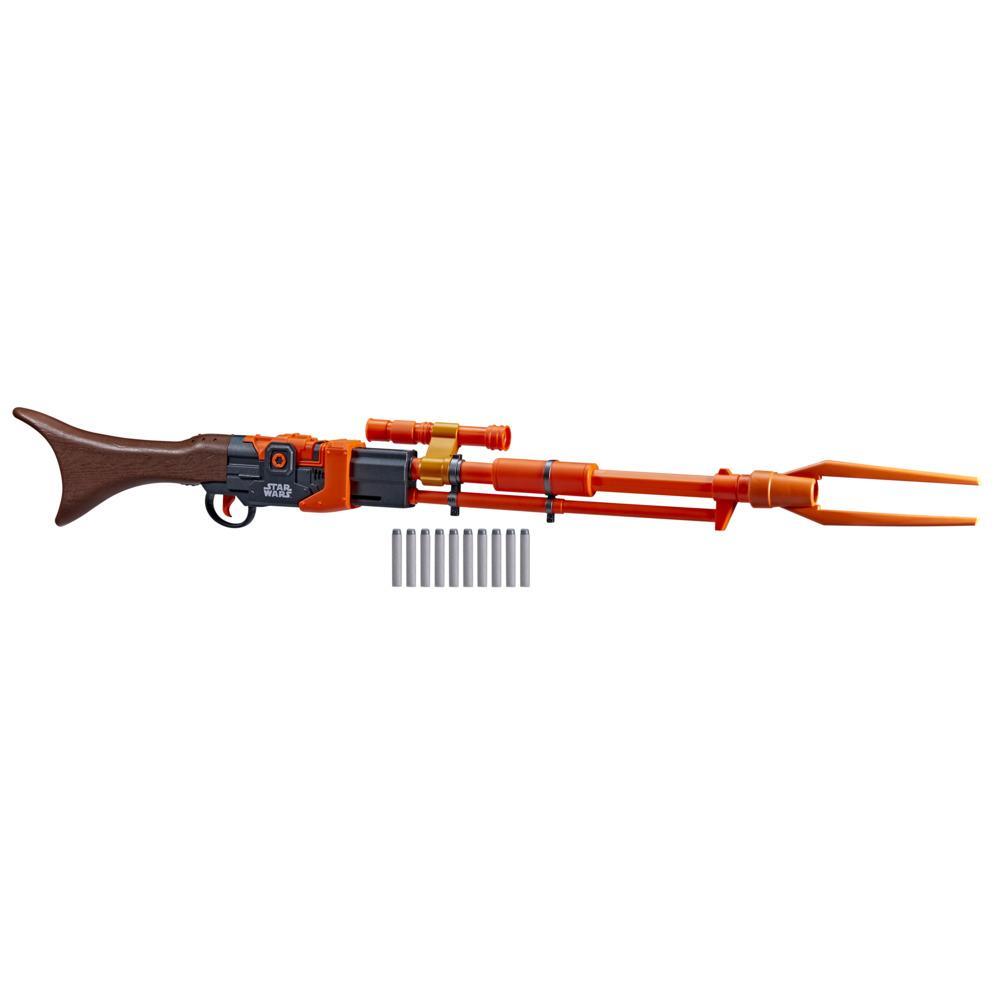 The Mandalorian is battle-worn and tight-lipped, a formidable bounty hunter in an increasingly dangerous galaxy. Imagine tracking down bounties and battling opponents with this dart-firing Nerf Star Wars Amban Phase-pulse Blaster. It captures the iconic look of the blaster seen in The Mandalorian live-action TV series on Disney Plus. It measures over 50 inches long (1.27 meters), making it an impressive addition to Nerf and Star Wars collections. To fire it, load a dart into the breech, pull back the priming handle, and pull the trigger. The blaster comes with 10 Official Nerf Elite darts for reloads. No batteries required. Eyewear recommended (not included). Star Wars products are produced by Hasbro under license from Lucasfilm Ltd. Hasbro and all related terms are trademarks of Hasbro.

•STAR WARS BLASTER REPLICA: This dart-firing blaster captures the iconic look of the Amban Phase-pulse Blaster seen in The Mandalorian live-action TV series on Disney Plus
•OVER 50 INCHES LONG: It measures an awesome 50.25 inches long (1.27 meters)! Whether you're displaying the blaster or bringing it to a game, this blaster is sure to impress!
•BREECH LOAD, PRIMING HANDLE, SCOPE: Load a dart into the breech, pull back the priming handle, and press the trigger to fire. Comes with a targeting scope. No batteries required
•INCLUDES 10 NERF ELITE DARTS: Includes 10 Official Nerf Elite foam darts that are great for indoor and outdoor games and are tested and approved for performance and accuracy
•THE MANDALORIAN: The Mandalorian is battle-worn and tight-lipped, a formidable bounty hunter in an increasingly dangerous galaxy

•Ages 8 and up
•TO AVOID EYE INJURY: WARNING: Do not aim at eyes or face. Use of eyewear recommended for players and people within range. Use only official Nerf darts. Other darts may not meet safety standards. Do not modify darts or blaster.
•WARNING: CHOKING HAZARD - Small parts may be generated. Not for children under 3 years.
•Assembly required.
•Includes: blaster, barrel, prongs, 10 darts, and instructions.