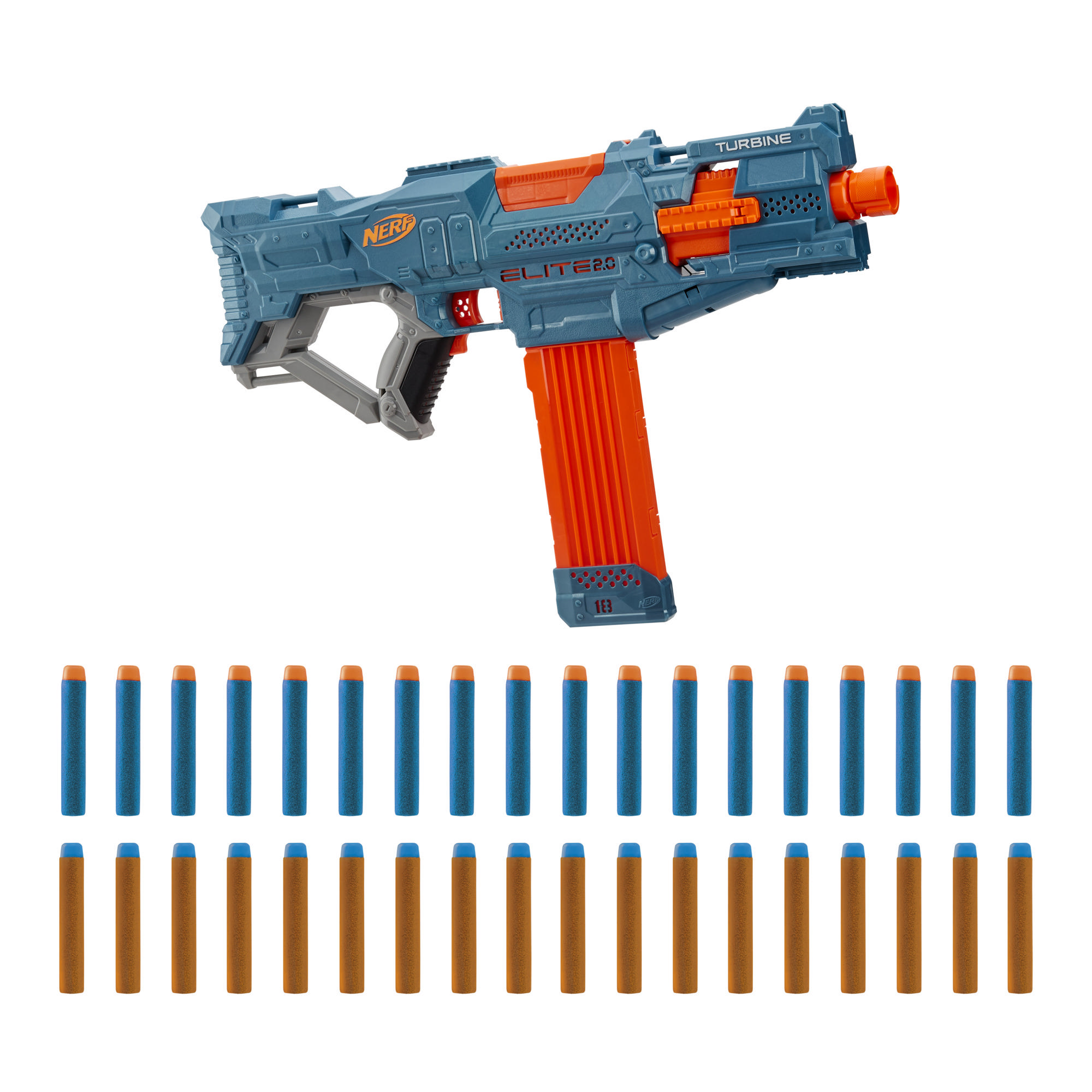 Gear up for battle with Nerf Elite 2.0 blasters that feature built-in customizing capabilities so you can upgrade them and seize the advantage in Nerf competitions. Build your stockpile of Elite 2.0 blasters to optimize your game strategy and bring tactical performance and flexibility to every mission and battle!
The Nerf Elite 2.0 Turbine CS-18 blaster has 4 tactical rails and a barrel attachment point so you can customize it for each mission or battle. This motorized blaster has an 18-dart clip and launches darts fast -- hold down the acceleration button to power up the motor, then press the trigger for rapid-fire blasting. Includes 36 Official Nerf darts -- load 18 in the clip and keep the other 18 nearby for reloads. Fires darts up to 90 feet (27 meters). Eyewear recommended. Barrel extension and eyewear not included. Batteries required (not included).
Nerf and all related properties are trademarks of Hasbro.

UPGRADE-READY BLASTER: Customize the blaster for every battle or mission by taking advantage of 4 tactical rails and a barrel attachment point (barrel extension not included)
INCLUDES 36 NERF DARTS: Comes with 36 Official Nerf darts to fully load the 18-dart clip -- and 18 more darts so you're ready for reloads. Fire, reload, and fire some more!
MOTORIZED BLASTER: Fire darts rapidly from the motorized blaster and overwhelm the competition! Hold down the acceleration button and pull the trigger. Batteries required (not included)
FIRES DARTS UP TO 90 FEET (27 METERS): Go the distance with this blaster that fires darts up to 90 feet (27 meters)

• Includes: blaster, 18-dart clip, 36 darts, and instructions.
• Ages 8 and up
• TO AVOID EYE INJURY:
• WARNING: Do not aim at eyes or face. Use of eyewear recommended for players and people within range. Use only official Nerf darts. Other darts may not meet safety standards. Do not modify darts or blaster.
• WARNING: CHOKING HAZARD - Small parts may be generated. Not for children under 3 years.
• Requires x4 1.5V C alkaline batteries (not included)