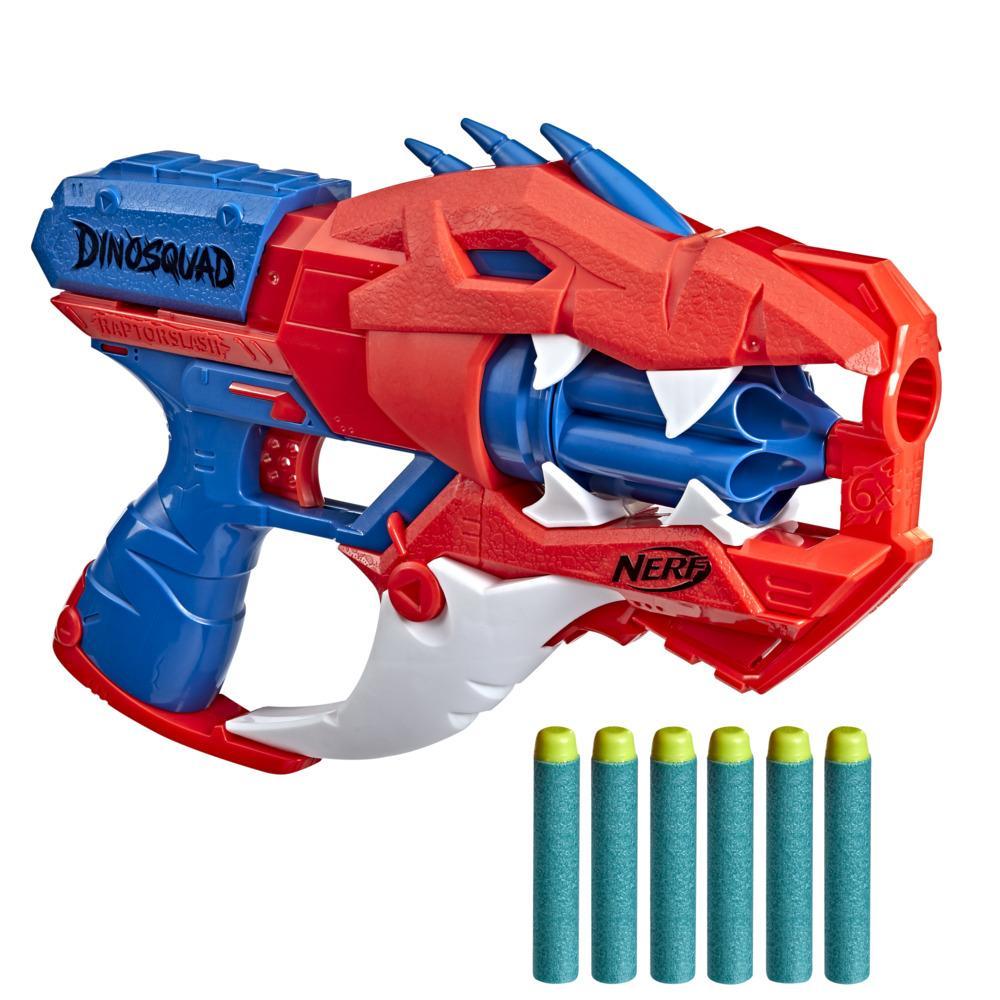 Team up with legendary dinosaurs as a member of the elite DinoSquad! Harness the extraordinary force of the greatest dinosaurs of all and blast into amazing adventures! Fire into ferocious fun with the Nerf DinoSquad Raptor-Slash blaster! It features an awesome dinosaur design, capturing the look of a Velociraptor dinosaur. The blaster features a 6-dart rotating drum so you can launch 6 darts in a row. The blaster is designed so that the darts blast from the raptor’s toothy mouth! Fire 1 dart a time, or slam-fire all 6 darts fast. Load the drum, move the priming slide backward and forward, and pull the trigger to unleash 1 dart. Pour on the firepower with slam-fire action -- hold down the trigger and keep moving the slide backward and forward to release all 6 darts fast. Includes 6 Official Nerf Elite foam darts that are great for outdoor and indoor adventures. Eyewear recommended (not included). No batteries required. Nerf and all related properties are trademarks of Hasbro.

•NERF DINOSQUAD RAPTOR-SLASH BLASTER: Fire into ferocious fun with this dart blaster that features awesome dinosaur details, capturing the look of a Velociraptor dinosaur
•6-DART ROTATING DRUM: Fire 6 darts in a row from the blaster’s rotating 6-dart drum designed so that the darts launch from the velociraptor’s toothy jaws! Load, prime, and fire 1 dart at a time
•SLAM-FIRE ACTION: Slam-fire all 6 darts fast! Hold down the trigger and keep moving the priming slide backward and forward to rapidly unleash 6 darts in a row
•6 NERF DARTS: Comes with 6 Official Nerf Elite foam darts that are great for outdoor and indoor battles and are tested and approved for performance and quality


•Ages 8 and up
•TO AVOID EYE INJURY: WARNING: Do not aim at eyes or face. Use of eyewear recommended for players and people within range. Use only official Nerf darts. Other darts may not meet safety standards. Do not modify darts or blaster.
•WARNING: CHOKING HAZARD - Small parts may be generated. Not for children under 3 years.
•Includes: blaster and 6 darts.